There are many gender identities and sexual orientations that anyone can feel connected to or identify with.

More and more terms have been popularized over the years to represents the emotions and experiences of queer individuals and if you aren’t immersed in the LGBTQ+ culture or the queer community, you might not recognize a few sexual orientations and gender identities due to a lack of representation in mainstream media.

One such term is demigirl. Sadly it is one of the more misunderstood gender identities, so we are going to talk about what does it mean to be a demigirl, discuss the demigirl pride flag and its colors, they help you with some information to become a better ally to the demigirl community.

A demigirl is someone who partially identifies as a woman, girl, or otherwise feminine, regardless of their assigned gender at birth. A critical feature is that a demigirl may or may not identify as another gender in addition to relating to the gender roles or norms of being a girl or woman.

A demigirl may also be called a demiwoman, demilady, or a demifemale. This may be someone assigned female at birth who feels very slightly connected or disconnected to that identification. Still, someone does not need to be anatomically a girl or woman for them to be a demigirl.

The main characteristic of being a demigirl is that even though one feels different from their assigned gender, it isn’t enough to make a demigirl experience dysphoria or discomfort. This is unlike how it would feel for someone that is transgender and feels the push to change how they look to feel comfortable with their identity.

A demigirl can refer to a person that was assigned male at birth, is transfeminine, and doesn’t identify as binary. They may feel much closer to being female than being male in the physical or social sense. Someone who was assigned male gender at birth yet identifies as demigirl may not feel it as much to want to change their gender or identify as a woman to fit into a gender role.

Demigirls can also identify as transgender, non-binary, and demigender. They may feel more comfortable identifying on the spectrum rather than on one rigid gender identity. The complimentary term for someone who partially identifies as a man, boy, or otherwise masculine, regardless of their assigned gender at birth is a demiboy.

Above all understanding gender identities with respect to each individual and their identification is vital.

Read more: Is forgetting what day it is a sign of dementia

Be mindful that while some identities may have only slight differences, they may still mean a lot to someone. All you need to remember is that everyone’s experience of gender and attraction is different – and that it is for them alone to define.

Most queer identities have their own LGBTQ flag to represent them The demigirl pride flag is meant to represent gender neutrality, which is a massive factor in the experience of being a demigirl. It is intended to signify the feeling of being questioning and shifting of gender.

The pink stripes represent femininity, while the other colors (shades of gray), indicate the partial nature of being demigirl and the possibility of more genders rather than the two on the binary spectrum. There is no lack of options on the demigirl gender. White stands for conformity to the non-binary umbrella.

When Is Demigirl Pride Day?

Awareness, visibility, remembrance, and celebration are all important in increasing the acceptance and recognition of queer identities and queer folx around the world.

By observing an international day for demigirls, it is easier to for demigirls to talk to friends and loved ones – and to feel the love. It also helps foster awareness and increased sensitives from society at large.

So, mark your calendar and plan something special (even if it is just a social media post!) for June 21st, which is Demigirl Pride Day! 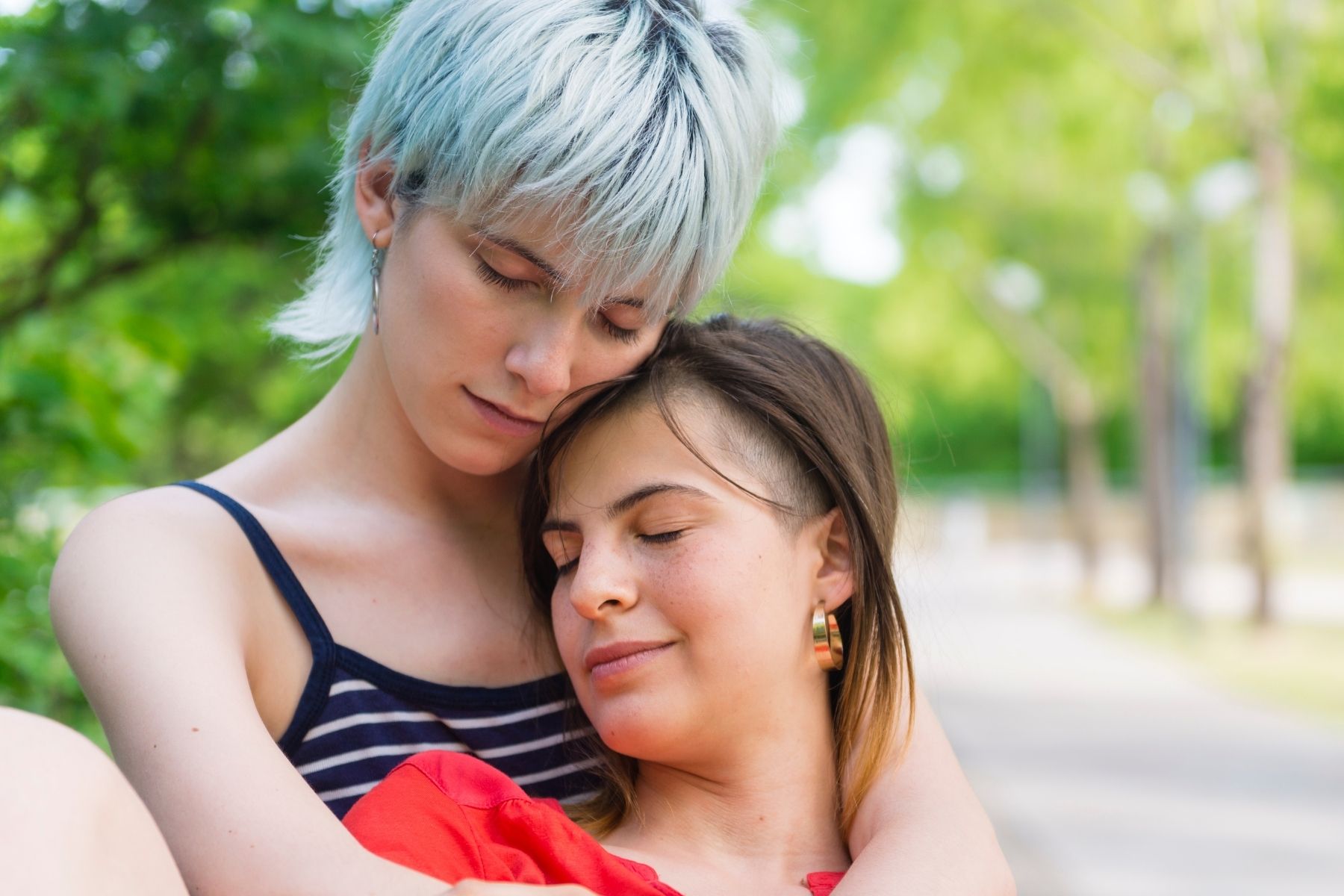 Other Demigirl Information To Help You Be A Better Ally

Here’s how to be a better ally to the demigirls in your life:

Don’t treat them as one size fits all

Everyone explores their gender in their unique way, so it is better to treat all the demigirls in your life as individuals rather than generalize them.

Read more: What Is It Like to Have Boobs? Here&039s What You Need to Know

Keep in mind that a demigirl may look like a person assigned male gender at birth but feels ‘as pretty as a girl’. The person may feel feminine or may even look like a girl. However, please always remember that no one knows by looking that someone is a demigirl, so it’s best not to make any assumptions.

Wait until they tell you they’re demigirl and what pronouns they prefer. If they do not, they are probably not comfortable so give them the space and time they need to come out to you.

Understanding what it means is one of the most important steps to learning how to be an excellent ally to demigirls. A demigirl, as we mentioned earlier, is someone who identifies as partly feminine. The other gender is usually unspecified or unimportant.

People that identify as demigirl are part of the trans *spectrum. The asterisk is there because, without it, it would specifically refer to the trans community. Most times, demigirls may identify as non-binary identities such as genderqueer or maverique.

Demigirls associate nonconformity with the absence of gender rather than feeling uncomfortable with their body. They feel this way because they’re ok with their bodies and have no desire to transition.

Even if you don’t acknowledge it, you most likely have biases and prejudices that you should confront. It might be uncomfortable for you to realize it at first, but once you realize what they are, you will be able to defy them.

Confronting your biases includes educating yourself about what being demigirl is. Remember that the LGBTQ community no longer uses derogatory terms such as ‘homo’ or ‘homosexual’. Instead many prefer to use the term ‘gay’, ‘queer’, or ‘lesbian’ to describe themselves, and remember that the most commonly used pronouns for genderqueer folx are ‘they/them/theirs.

Never, ever, ever say “it” – because only a bad human would want to refer to another human in this way – regardless of gender.

Some people like to make crude comments or derogatory remarks and jokes towards gender-non-conforming folx. If you hear such remarks against your friend or other people in the queer community, speak up against such prejudices and let them know it isn’t right to encourage or take part in it.

Read more: At what temperature is it dangerous to be outside

The same goes for any jokes that are at others’ expense, especially queer marginalized communities and misunderstood identities such as intersex, asexual, transgender, agender, genderqueer, and genderfluid. We are not here to be the butt of any jokes – and quite frankly, are sick of it. It is not – and never was – OK.

Most times, offensive material is circulated on social media or WhatsApp. Remember to tell people that are making such comments why it’s wrong to do that.

Some of them may feel like they should have a body that relates to the gender they identify with. Dysphoria may also be absent in some demigirls, or they may have apathy about their identity unless someone tries to take away their right to validate their gender as it is.

For demigirls, their gender is a fact and says nothing about who they are, their personality, or their identity. Rather than experiencing demigirl dysphoria, a demigirl may feel that something is right or wrong regarding gender-related things or rendering.

Use the right pronouns

Don’t always assume that a demigirl will use ‘hers’ or ‘she’ pronouns. Tastes and preferences vary depending on the individual.

You can help normalize the use of pronouns in your everyday life with small actions like giving your preferred pronouns at the beginning of an introduction, signing your emails off with them, or wearing LBGT enamel pins that declare your pronouns to the world.

Keep in mind that the best way to find out someones preferred pronouns is to ask them. Demigirls identify under non-binary, so find out what pronouns people under this umbrella would like to be called. Some may use ‘they/them’ pronouns, others may use ‘she’ or ‘him’ pronouns, and others will choose different pronouns.