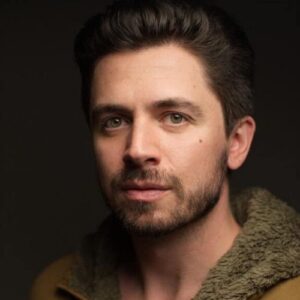 Following the extraordinary events that have taken place at home and across the world in the last three months, we decided it was about time we revived our Five Questions With… series. The aim is to invite theatre people to have their say, starting off with the question, ‘How the hell are you?’

Our first contributor is actor, singer and writer NADIM NAAMAN. Both Lebanese and British in heritage, Nadim was born and raised in London. He trained in Musical Theatre at the Royal Academy of Music, where he has since been appointed an associate. Prior to this, Nadim studied Theatre and Performance at the University of Warwick.

As an actor, he has recently starred as Raoul in The Phantom of The Opera (Thessaloniki and Athens) and as Khalil Gibran in Broken Wings (London and international tour). Other theatre credits include: On The Town (BBC Proms, Royal Albert Hall); By Jeeves (The Old Laundry); The Phantom of The Opera (Her Majesty’s Theatre); Sweeney Todd (Harrington’s Pie & Mash Shop); One Man, Two Guvnors (Theatre Royal Haymarket); The Sound of Music (London Palladium); Titanic (Toronto and Southwark Playhouse); Chess (The Union); Marguerite (Tabard); James and the Giant Peach (The Watermill) and The Last Five Years (Pleasance).

Nadim is the book writer and co-composer of the critically acclaimed Khalil Gibran musical Broken Wings, written with Dana Al Fardan. Broken Wings premiered in London’s West End (Theatre Royal Haymarket) in 2018 and has since been touring internationally. Nadim’s 2016 studio album, Sides, topped the iTunes UK Vocal Chart, and is available on iTunes and Spotify.

How the hell are you?

I am doing alright, thank you. It has been a rollercoaster these last few months, with moments of fear and anxiety regarding so many things. Particularly as Covid has greatly impacted lives within my extended family. But overall, my loved ones and I are healthy, and I’m trying my best to find the positives in each day.

What are your fears and hopes for the performing arts and the theatre industry in particular?

My fears lie mainly in the amount our industry may be decimated. On a micro level – how many performers, musicians, creatives and backstage team members may be forced to leave the theatre behind with so much financial uncertainty? This industry was competitive and tough enough anyway, with the number of jobs we had available, and now there may be even fewer up for grabs.

On a macro level – the closure of theatres and the end of companies, reductions in audience numbers with fewer tourists wanting to travel to the UK and elderly Brits reluctant to risk mass gatherings. I’m also worried that the economics of theatre mean that we are less able to adapt than other industries without dramatically reducing production values. Of course, much of these worries would be offset if our Government finally stepped up and recognised the important of what we offer the country, both culturally and economically, and offered financial support to make this year more manageable for all. We don’t just want to salvage the shows that already exist, we want to continue to create new, exciting work and tell new and diverse stories. The theatre must not become a place for only the wealthiest.

Theatre people have shown such incredible creativity during the last three months, can you describe some of the projects you have been involved in? What plans of yours have been put on hold?

I’ve done plenty of online work, but I must say I feel that wave is now beginning to run its course. I believe we have to stop giving quite so much away for free, as we risk devaluing our craft and fuelling the ignorant notion that we are willing to continue offering our skill sets for free. Theatre is our passion but it is not a hobby.

Other work has included voiceovers, which thankfully are doable in the current climate, and I’m focusing on my next musical. We aim to record a concept album late this year or early next. Personally, 2020 has of course been pretty much decimated, with two shows and about seven concerts cancelled or rescheduled for 2021. My only remaining gig of 2020 is on New Year’s Eve. Fingers crossed.

The biggest blows have been not completing our run of Phantom in Greece, and a complete loss of momentum for Broken Wings after two such wonderful years getting our new musical out there. Things were flying after our run at Dubai Opera House in January, and we were in talks regarding shows this year in the Middle East, London and Paris, all of which are now cancelled or on hold. I’m hopeful that we can salvage it all in due course, but we have to be extremely patient, and the show/financial model we have used thus far will need to be revised in scale if we hope to make it work for both ourselves and venues. The budgets will simply not be there as they were before.

Read more: Keep the Worms Out of Your Pets Heart! The Facts about Heartworm Disease | FDA

Can we be lighthearted and nostalgic for a moment? Could you pick a highlight from your career so far?

I can’t decide! Having the honour of playing Raoul in the 30th anniversary cast of Phantom at Her Majesty’s – feels particularly poignant in light of recent events – and sharing the stage with cast and creatives from the show’s wonderful history. Playing the role of Anthony in Sweeney Todd just three feet away from Stephen Sondheim, and seeing his smile and response at the end of ‘Johanna’. And of course, Broken Wings. Having an idea for a musical and seeing it come to life on several stages is a thrill like no other. If my career were to end tomorrow, these are the three moments I’d proudly carry with me forever. I’ve been very fortunate and am very grateful.

On top of the fact that we have been experiencing what it is like to live through a global pandemic, there have been extraordinary events lately which have resulted in a desperate need for all of us to stand up for diversity and racial equality. You have commented on this via your social media, can you give us your response to these events?

I have been overwhelmed and inspired by the Black Lives Matter movement. It feels like a genuine turning point in our history, even though there is evidently still so much work to be done. But it’s time for us all to share responsibility of doing more and calling out inequality as and when we see and hear it. Hopefully this will inspire and encourage the same attitudes and action across all forms of inequality that sadly resonate in our society – gender equality, homophobia, Islamophobia and many more.

My skin is white, but I am mixed race, and my Lebanese heritage has highlighted the prevalence of sectarian conflict, tension and politics in the Middle East. My family have been greatly affected by civil wars and disruption, having to relocate all over the world and leave their homeland. Where you are judged on your family name, your faith, and who you are related to. I consider myself extremely fortunate to have grown up in a family where there is no template to follow, where love is love, where people of different ethnicities and religions and sexuality are respected and treated equally. I will do everything I can to spread messages of tolerance and equality for the rest of my life.