if your nose itches it could be allergic rhinitis 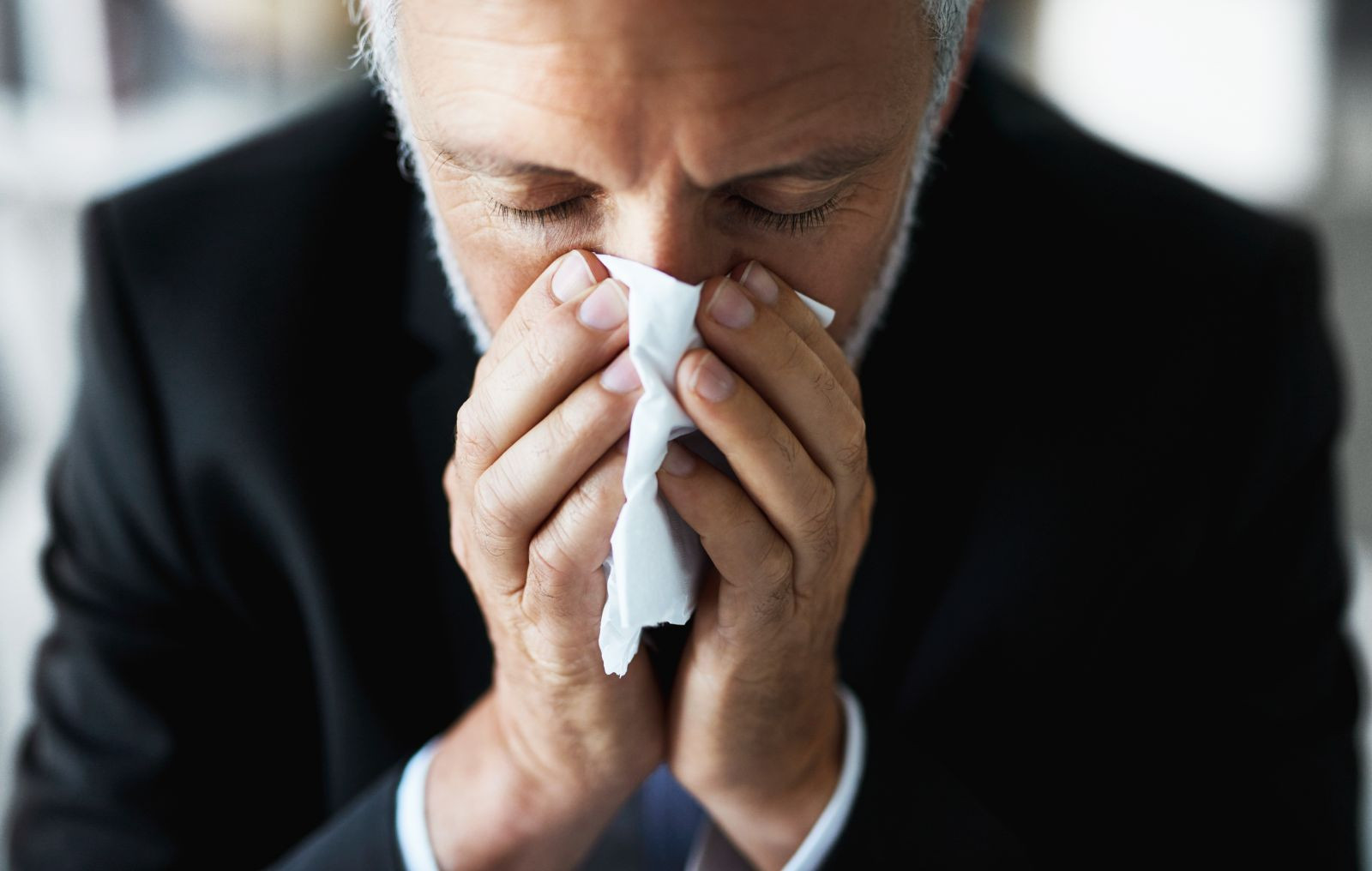 It’s easy to dismiss hay fever as a minor nuisance. but call it by its proper name, allergic rhinitis, and you’ll be well on your way to recognizing it as a legitimate medical problem. Add in the fact that it affects roughly one in five Americans and drains the economy of billions of dollars each year, and you’ll see that it’s a really big problem. Fortunately, it is also a problem that responds very well to treatment.

if a man thinks of his nose, he probably thinks of it as a simple organ of smell. It is true, of course, that the nose is responsible for the sense of smell, but smell means much more than the ability to enjoy pleasant aromas. Because smell is a major contributor to taste, it plays a central role in maintaining good nutrition. smell can also warn us of dangers ranging from toxic gases and smoldering fires to spoiled food.

Allergic rhinitis can impair the sense of smell and can also interfere with other important functions of the nose. When your nostrils are working normally, they pass between five and eight quarts of air every minute. your nose has the job of conditioning that air before it reaches the sensitive tissue of your lungs. your nose adds moisture, but to do so, it must produce large amounts of mucus. it also heats the air, with the help of a large network of blood vessels. finally, the nose traps small particles, keeping them out of the lungs.

If you have allergies and your nose catches pollen or other particles to which you are sensitive, an inflammatory process starts right in your nose. immune system mast cells in nasal tissue release chemicals such as histamine and leukotrienes. blood vessels swell, causing nasal congestion, and mucus production spikes, creating a runny nose. Just like that, you have developed some of the symptoms of allergic rhinitis and some of the normal functions of your nose have been compromised.

Read more: Why Do Security Cameras Have a Red Light? – Home Security tips, tricks, and advice to keep your home safe

Rhinitis can also occur without allergies. examples include viral rhinitis (the common cold); drug-induced rhinitis (possible culprits include viagra and other erectile dysfunction pills, alpha blockers used for benign prostatic hyperplasia, ace inhibitors and beta blockers used for hypertension, and aspirin and nonsteroidal anti-inflammatory drugs) ; and hormonal rhinitis (including the “pregnant nose” that some women experience). In some people, exercise, diet, and exposure to cold or dry air, air pollutants, or strong odors can trigger rhinitis. inflammation is absent in nonallergic rhinitis, and symptoms are limited to runny nose and nasal congestion.

A final category of rhinitis can be particularly tricky. is rhinitis medication, irritation of the nasal membranes caused by overuse of decongestant nasal sprays such as phenylephrine and oxymetazoline that some people use for quick relief of allergic rhinitis.

Nearly all people with allergic rhinitis complain of itching, stuffy nose, and runny nose. sneezes are almost as common, and a postnasal drip can lead to a cough. typical symptoms extend beyond the nose and include itchy or sore throat and itchy, burning, and watery eyes that may look red due to allergic conjunctivitis.

20% to 40% of patients with allergic rhinitis also have asthma. Other allergy-related disorders, such as eczema, may also be present. some patients have nasal polyps, deviated nasal septum, or sinusitis.

Most people with allergic rhinitis can self-diagnose the problem simply by recognizing the typical symptoms. In complicated cases, an ENT (ear, nose, and throat) specialist can check for polyps and other nasal abnormalities. if it is important to identify specific allergic triggers, allergists may perform skin tests; the so-called rast blood test can also help identify the culprits.

Avoid triggers. These are the steps to take for seasonal rhinitis:

Read more: What is iCloud and how do I use it? | Asurion

for allergic rhinitis throughout the year:

Medications. There are many treatments available. here is a brief summary of the main types.

antihistamine tablets will help most patients. for most people, one of the least sedating preparations will be best. Many are available without a prescription, including loratadine (Alavert, Claritin, Generic), cetirizine (Zyrtec, Generic), and fexofenadine (Allegra, Generic). high doses can cause drowsiness and dry mouth; men with benign prostatic hyperplasia (bph) may have difficulty urinating.

steroid nasal sprays are very effective, but usually take several days to work. Like oral antihistamines, these medications can relieve eye and nasal symptoms. examples include budesonide (rhinocort allergy), fluticasone (flonase allergy relief), and triamcinolone (24-hour nasacort allergy), which are available without a prescription. side effects may include nasal irritation and headaches.

antihistamine nasal sprays are an alternative to oral antihistamines. Azelastine (Astelin) and Olopatadine (Patanase) are available by prescription; some patients experience a bitter taste or drowsiness.

Leukotriene blockers, such as the oral prescription drug montelukast (Singulair), relieve most symptoms of allergic rhinitis. headache can be a side effect. In addition, the FDA has issued a warning about mental health side effects, including suicidal thoughts.

Read more: What is a Home Equity Line of Credit and How Does it Work?

decongestants are available over the counter as tablets (pseudoephedrine, phenylephrine) or nasal sprays (phenylephrine, oxymetazoline) and may relieve nasal congestion but have little effect on other symptoms of allergic rhinitis . side effects can include nervousness, palpitations, high blood pressure, and insomnia. men with bph may have difficulty urinating. Decongestants should not be relied upon for primary treatment but can be combined with a first-line drug for temporary use. You should not use a decongestant nasal spray for more than a few days.

Other medications include an anticholinergic nasal spray called ipratropium (atrovent), which is effective only for a runny nose, and various allergy eye drops can be used to treat eye symptoms. In rare cases, patients with severe rhinitis may need a short course of oral steroids.

Immunotherapy or “allergy shots” may help achieve long-term control of allergic rhinitis. the regimen typically includes skin testing to identify the offending allergens, followed by weekly injections of gradually increasing doses of the allergen, and then maintenance injections every two to six weeks for several years. most doctors reserve immunotherapy for patients who do not respond well to medication.

For many people, allergic rhinitis is a temporary seasonal problem, but for others, it’s a year-round nuisance. and for some, it can be related to asthma, sinusitis, or other more serious problems. Because allergic rhinitis is so common, it also adds up to an expensive proposition for American society.

If you’re one of the many unlucky with allergies, you’ll need to learn to deal with the problem. avoid exposure to things that trigger symptoms. experiment with medications to control symptoms; non-sedating antihistamines, antihistamine nasal sprays, and steroid nasal sprays are among first-line treatments. some men may prefer one of the many other medications available, and others need combination therapy. immunotherapy is available for particularly difficult cases.

The many options for treating allergic rhinitis can be confusing at first, but if you take the time to do your research, you’ll find a way to keep your nose running smoothly—without running!